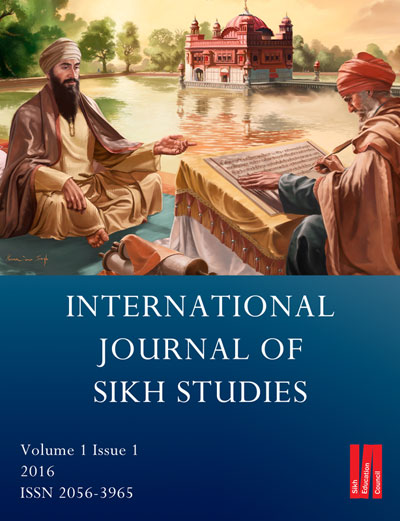 ‘A Study of Epistemological Warfare Initiated by Brahmanical Forces Against the Sikh Way of Life’
pgs. 44-63
JASVIR SINGH

‘Group Power Contest Theory and Neo-Sanatan Strategies for Countering Sikh Nationalism‘
The main focus of this paper concerns how Indian unitary forces are applying every dimension of their power to eliminate the continuously increasing sense of Sikh National identity. We analyse how power is a significant source of the conflict between the Sikhs and Brahmanical forces, Indian unitary state and their neo-Sanatan scholars. Through this study an attempt is made to analyse how the present conflict relates Sikh nationalism to the community’s past struggle against Brahmanism. Brahmanical forces have always used the third dimension of power for dominating Sikhs, by distortion of the meanings and interpretations of Sikh history, ethos and their episteme as fixed by Guru Nanak. The theories and concepts of power and psychological warfare are used for examining this phenomenon.

‘Countering Oppression through Khalsa Principles: An Analysis of the Leadership Credence of Banda Singh Bahadur‘
This article covers the Sikh response to Mughal oppression – submission or resistance even in a “hopeless” position. Soon after the departure of the last Sikh Guru, Gobind Singh, in 1708, a dispute arose within the Sikh community at the Gurdas Nangal siege of 1715. This dispute centred around whether to follow the socio-political doctrine of the Sikh Gurus (Nankonian philosophy) which entailed living as free men, but with the risk of impending slaughter from the Mughal enemy, or surrender to “Dhimmi” status and live subordinately as non-Muslims in an Islamic state. Guru Gobind Singh’s appointed Commander-in-Chief, Banda Singh Bahadur, tackled this dispute at the Gurdas Nangal siege when he refused to surrender or accept the Mughal offer of reconciliation. This article re-evaluates strategical decisions, from a Khalsa perspective (a fearless, God-centric challenge to tyranny), by examining the similarities between the leadership of Guru Gobind Singh at the Anandpur siege of 1705 with that of Banda Singh at the Gurdas Nangal siege. The analysis of these historical events will explore the flaws and peripheral issues of surrendering to oppression and whether there are any lessons to be learnt from Banda Singh’s leadership credence. There are clear parallels between Banda Singh’s teachings and Burke’s axiom, “All that is needed for evil to triumph is for good men to do nothing”, which remains as true today as it was in the 18th Century.

‘A Study of Epistemological Warfare Initiated by Brahmanical Forces Against the Sikh Way of Life‘
In the 1980s, a number of both Indian and foreign academics began to study the Sikh religion. Based on their published works, the motives for doing so can be seen in the positions they have taken and the insights they have made about the Sikh way of life, which we have termed ‘neo-Sanatan’. Unlike previous attempts by Brahmanical scholars engaged in promoting the Indian Unitary State, these academics are widespread, professional and have worldwide amplitude. Consequently, the Sikh community’s distinct existence is being concertedly destabilised and repeated efforts to control the distribution of knowledge within the Sikh community show no signs of being curbed. The focus of this paper is to identify and analyse how this anti-Sikh episteme is being embedded in International academic circles as a “regime of truth”.